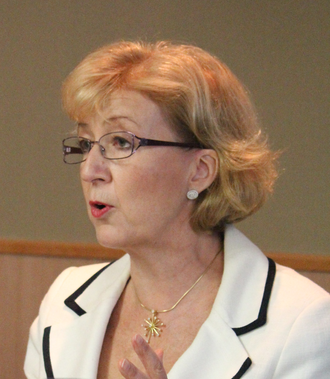 Andrea Leadsom – a political star in the making?

Andrea Leadsom – a political star in the making?

The person who becomes leader of the Conservative Party is never the bookies’ favourite a few months before the election. This rule stretches all the way back to the early ‘60s, covering Cameron, Howard, Duncan-Smith, Hague, Major, Thatcher and Heath. So although it looks like Theresa May is home and dry, I wouldn’t mind putting a few quid on Andrea Leadsom.

Leadsom was one of the stars of the referendum debates, performing so well on ITV on June 9 that she was chosen to represent Leave again (alongside Boris Johnson and Gisela Stuart) at the second major debate at Wembley on June 21.

She possesses that invaluable combination of warmth and authority. She has a refreshingly smiley, sunny disposition and can also point to an impressive career history outside politics. Given that she only entered Parliament in 2010, and hasn’t yet served in the Cabinet, we really can apply to her recent rise through the ranks that sometimes over-used adjective “meteoric”.

Yesterday she carried out her first major TV interview, with Andrew Marr, and she was excellent. She’s yet to pick up that dreadful political habit of dodging questions – let’s hope she never does – so comes across as honest and sincere as well as likeable and impressive.

There are some in the Conservative Party who say that the country is facing such a pivotal few months that Theresa May should be appointed leader as soon as possible, without having to go through the grubby business of an election. That could happen. But if the contest goes on, Leadsom has a great chance not only of making it through to the final two candidates to be put before Conservative members, but of going all the way.

One way or another, we’ll be hearing a lot more of Andrea Leadsom in the coming years.