As Theresa May flew over the Atlantic this week to meet President Trump, she will surely have reflected upon how well she has picked her opponents. Labour is in a trough. The LibDems are climbing, but from the lowest of bases. UKIP, post-Farage, is an unknown quantity. Only the SNP is in the groove.

It all means that her position seems unassailable – even with the huge uncertainty over Brexit.

But for how long? As David Cameron knows, a leader can quickly go from hero to zero. Once the honeymoon period is over (and they all end eventually), May will be scrutinised like never before. And all those things that commentators are, for the moment, letting pass – an ill-conceived comment here, a botched decision there – will be used against her with far greater hostility and purpose than at present. 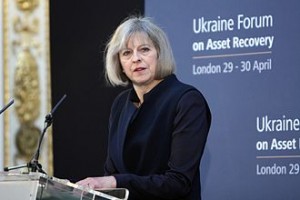 The danger for May is particularly acute, as she is no natural performer. Yes, she is a serviceable public speaker when she’s in total control of what she says and how she says it, and she more than holds her own in the bear pit of PMQs against a limited opponent. But her challenge comes when interaction and spontaneity are required away from the House of Commons, such as in media interviews, press conferences and speaking on the hoof. Then she looks tense and awkward, sounds evasive and struggles to project warmth.

Naturally, people will compare her with Margaret Thatcher, who also had difficulty, particularly in the early days, with her media image. Thatcher realised this, and employed coaches to help her – and, as a result, she became reasonably good, though always better at conveying conviction than humanity.

Likewise, May needs to improve markedly. Her evasiveness is her most obvious challenge. Just like Gordon Brown, she seems to regard too many questions as potential banana skins. For sure, some questions can be dangerous, but not as many as May seems to think. Take her interview with the BBC’s Andrew Marr last Sunday. He asked her four times whether she knew about the Trident missile failure, and each time she dodged the question. The result? The watching audience assumes the worst – that she did know, but didn’t want to admit it. Cue a massive scrambling operation in Downing Street, and a brick removed from her wall of unassailability.

A golden rule of doing media interviews is always to answer or at least address the question. Dodging it altogether, especially four times, makes the dodger sound untrustworthy and even deceitful. May must quickly get out of that destructive habit while she has time.

She also needs to work out what her personal story is. Like it or not, successful leaders tell us a lot about themselves and their “journey” (think Bill Clinton, “the boy from Hope”). Yet May is clearly uncomfortable talking about herself and, for example, the trauma of losing both parents when she was young. That’s understandable, of course. But the danger is that her opponents will frame her story for her. Already titbits are leaking out that she is a control-freak when it comes to running the government. She needs a counter-story to challenge these damaging rumours.

Finally, what about her meeting with President Trump? As Prime Minister she hasn’t yet appeared at ease with foreign leaders, looking like Billy No-Mates at the EU summit in December. With Trump, there are other dangers. Let’s hope it’ll be a case of opposites attract, because they could hardly be more different – she guarded and shy, he belligerent and provocative. If she carries out a joint press conference with him she’s bound to be asked about his comments on women, disabled people and ethnic minorities – minefields, all of them. It will be a big test of her ability to be diplomatic, while conveying strength and thinking on her feet, and an equally big test of how much she has learned and improved since last summer.

May has many strengths as a leader, and has impressed onlookers by her determination, steady competence and ability to navigate through treacherous waters. She has earned public respect, if not public affection.

But as a media performer she’s weaker than any Prime Minister since Edward Heath 45 years ago.

So now is the moment, with her opponents struggling, to develop her personal communication skills. The time will inevitably come when she’ll need them to keep her premiership going.

This article first appeared in the CIPR’s Influence Magazine